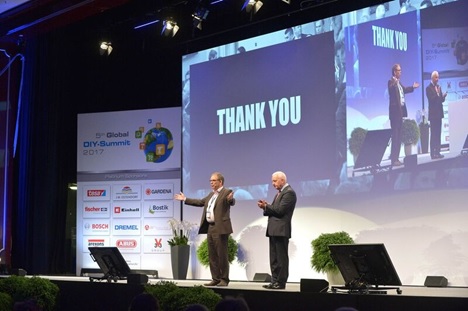 A GLIMPSE INTO THE FUTURE

This year’s motto was “A New Era – A Glimpse into the Future of Home Improvement”. The speakers gave outstanding presentations on digital platforms as new business models worldwide, the political and economic forecasts after Trump Presidency and Brexit, how a company should start its own digital transformation, the promising future for the garden sector and a global overview of home improvement stores around the world. The general perception of global economy was positive and most of the speakers forecast more innovation and growth within the next years.

On the first day, Dr. Michael Grampp (Deloitte) presented a Global Economic and Political Overview and highlighted the risks and advantages within the era of Trump Presidency and Brexit. The high expectations for the presentation of the new President of EDRA, Sergio Giroldi (CEO OBI), were fulfilled with his impressive keynote “The New Modern: Leaving the Past to Live the Future”. The presentations from Biren van Herck (Pro-Alliance), Richard van Hooijdonk and his DIY Startup Arena were particular highlights of the first day, along with the excellent presentation on Digital Transformation by Peter Rosseel, Director Management Consulting Research and Visiting Professor at University of Leuven.

The second day also saw very interesting presentations on new global consumer trends including Kai Herzberger (Director EMEA for e-commerce facebook) and Alexander Zerdick (Director Retail Google). According to our audience, the best two speakers of the whole Summit presented during the Keynote Session: Ken Hughes and Steven van Belleghem. Both of them delighted the audience with their presentations on digitalisation and new marketing strategies to reach new audiences. Last but not least, the second day also delivered good presentations on how garden is becoming a very promising industry by Sebastian Gundel (OBI), Christian May (Kärcher) and David Domoney. Like every year, facts and figures on new growth markets from around the globe were presented by international companies such as Mitre 10 (New Zealand), United Hardware (Ireland), DCM Holdings (Japan) and Jumia (Nigeria).

This year’s farewell speech was held by Jim Inglis, the Global DIY-Lifetime Award recipient from 2015 in London. According to the audience, his speech was one of the highlights of the event. In the final wrap-up both Chairmen of the Global DIY Summit agreed that this had been a most interesting, informative and successful event having had a very positive feedback from the participants.

Six startups were given six minutes to present why their products would help companies to innovate in our industry: Sprayprinter, GoInstore, Magicplan, Augmented, Dor and Alfa Dispencer. The winner of the first DIY Startup Arena was a company from Estonia, Sprayprinter, with 47{2920dc35e13aa575d381a963680550d7ab92ea574880ecc82f11a0ccc4bb06ae} of the total votes. The first day culminated with the absolute highlight of the event: the Gala Dinner & Global DIY-Lifetime Award held at Velodrom in the Eastern part of Berlin. This year’s 5th Global DIY-Lifetime Award went to Gregory M. Bridgeford, former Executive Vice President of Business Development and Chief Customer Officer at Lowe’s. This International award was presented by the European DIY Retail Association (EDRA), the European Federation of DIY Manufacturers (fediyma) and the Global Home Improvement Network. First a truly brilliant laudation speech was delivered by Richard Maltsberger, Chief development Officer and President International at Lowe’s. So perfectly researched and executed, and so very befitting of a “giant” of our time who joined Lowe’s in 1982 as executive assistant to the Chairman and through his 32 years career served in a variety of increasingly responsible positions. In his brilliant emotional acceptance speech, Greg told the delegates the importance of networking and how much Lowe’s had learnt from “best practices” from other home improvement companies from around the globe.